What factors influence the absorbance that you would measure for a sample? Is each factor directly or inversely proportional to the absorbance?

When the concentration is reported in moles/liter and the path length is reported in centimeters, the third factor is known as the molar absorptivity (\(\varepsilon\)). In some fields of work, it is more common to refer to this as the extinction coefficient. When we use a spectroscopic method to measure the concentration of a sample, we select out a specific wavelength of radiation to shine on the sample. As you likely know from other experiences, a particular chemical species absorbs some wavelengths of radiation and not others. The molar absorptivity is a measure of how well the species absorbs the particular wavelength of radiation that is being shined on it. The process of absorbance of electromagnetic radiation involves the excitation of a species from the ground state to a higher energy excited state. This process is described as an excitation transition, and excitation transitions have probabilities of occurrences. It is appropriate to talk about the degree to which possible energy transitions within a chemical species are allowed. Some transitions are more allowed, or more favorable, than others. Transitions that are highly favorable or highly allowed have high molar absorptivities. Transitions that are only slightly favorable or slightly allowed have low molar absorptivities. The higher the molar absorptivity, the higher the absorbance. Therefore, the molar absorptivity is directly proportional to the absorbance.

If we return to the experiment in which a spectrum (recording the absorbance as a function of wavelength) is recorded for a compound for the purpose of identification, the concentration and path length are constant at every wavelength of the spectrum. The only difference is the molar absorptivities at the different wavelengths, so a spectrum represents a plot of the relative molar absorptivity of a species as a function of wavelength.

Since the concentration, path length and molar absorptivity are all directly proportional to the absorbance, we can write the following equation, which is known as the Beer-Lambert law (often referred to as Beer’s Law), to show this relationship.

Note that Beer’s Law is the equation for a straight line with a y-intercept of zero.

If you wanted to measure the concentration of a particular species in a sample, describe the procedure you would use to do so.

Measuring the concentration of a species in a sample involves a multistep process.

The second step of the process is to generate a standard curve. The standard curve is generated by preparing a series of solutions (usually 3-5) with known concentrations of the species being measured. Every standard curve is generated using a blank. The blank is some appropriate solution that is assumed to have an absorbance value of zero. It is used to zero the spectrophotometer before measuring the absorbance of the standard and unknown solutions. The absorbance of each standard sample at \(\lambda\)max is measured and plotted as a function of concentration. The plot of the data should be linear and should go through the origin as shown in the standard curve in Figure 1.2. If the plot is not linear or if the y-intercept deviates substantially from the origin, it indicates that the standards were improperly prepared, the samples deviate in some way from Beer’s Law, or that there is an unknown interference in the sample that is complicating the measurements. Assuming a linear standard curve is obtained, the equation that provides the best linear fit to the data is generated. 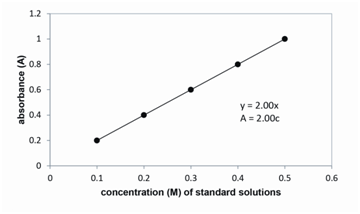 Suppose a small amount of stray radiation (PS) always leaked into your instrument and made it to your detector. This stray radiation would add to your measurements of Po and P. Would this cause any deviations to Beer's law? Explain.

The way to think about this question is to consider the expression we wrote earlier for the absorbance.

Since stray radiation always leaks in to the detector and presumably is a fixed or constant quantity, we can rewrite the expression for the absorbance including terms for the stray radiation. It is important to recognize that Po, the power from the radiation source, is considerably larger than PS. Also, the numerator (Po + Ps) is a constant at a particular wavelength.

Now let’s examine what happens to this expression under the two extremes of low concentration and high concentration. At low concentration, not much of the radiation is absorbed and P is not that much different than Po. Since Po >> PS, P will also be much greater than PS. If the sample is now made a little more concentrated so that a little more of the radiation is absorbed, P is still much greater than PS. Under these conditions the amount of stray radiation is a negligible contribution to the measurements of Po and P and has a negligible effect on the linearity of Beer’s Law. The ideal plot is the straight line. The curvature that occurs at higher concentrations that is caused by the presence of stray radiation represents a negative deviation from Beer’s Law.

Spectroscopic instruments typically have a device known as a monochromator. There are two key features of a monochromator. The first is a device to disperse the radiation into distinct wavelengths. You are likely familiar with the dispersion of radiation that occurs when radiation of different wavelengths is passed through a prism. The second is a slit that blocks the wavelengths that you do not want to shine on your sample and only allows \(\lambda\)max to pass through to your sample as shown in Figure 1.4. Figure 1.4. Utilization of a prism and slit to select out specific wavelengths of radiation.

Is there a disadvantage to reducing the slit width?

The important thing to consider is the effect that this has on the power of radiation making it through to the sample (Po). Reducing the slit width will lead to a reduction in Po and hence P. An electronic measuring device called a detector is used to monitor the magnitude of Po and P. All electronic devices have a background noise associated with them (rather analogous to the static noise you may hear on a speaker and to the discussion of stray radiation from earlier that represents a form of noise). Po and P represent measurements of signal over the background noise. As Po and P become smaller, the background noise becomes a more significant contribution to the overall measurement. Ultimately the background noise restricts the signal that can be measured and detection limit of the spectrophotometer. Therefore, it is desirable to have a large value of Po. Since reducing the slit width reduces the value of Po, it also reduces the detection limit of the device. Selecting the appropriate slit width for a spectrophotometer is therefore a balance or tradeoff of the desire for high source power and the desire for high monochromaticity of the radiation.

It is not possible to get purely monochromatic radiation using a dispersing element with a slit. Usually the sample has a slightly different molar absorptivity for each wavelength of radiation shining on it. The net effect is that the total absorbance added over all the different wavelengths is no longer linear with concentration. Instead a negative deviation occurs at higher concentrations due to the polychromicity of the radiation. Furthermore, the deviation is more pronounced the greater the difference in the molar absorbtivity. Figure 1.5 compares the deviation for two wavelengths of radiation with molar absorptivities that are (a) both 1,000, (b) 500 and 1,500, and (c) 250 and 1,750. As the molar absorptivities become further apart, a greater negative deviation is observed. Therefore, it is preferable to perform the absorbance measurement in a region of the spectrum that is relatively broad and flat. The hypothetical spectrum in Figure 1.6 shows a species with two wavelengths that have the same molar absorptivity. The peak at approximately 250 nm is quite sharp whereas the one at 330 nm is rather broad. Given such a choice, the broader peak will have less deviation from the polychromaticity of the radiation and is less prone to errors caused by slight misadjustments of the monochromator. 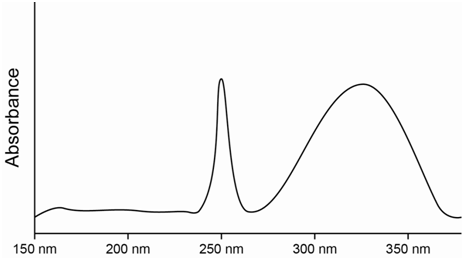 Figure 1.6. Hypothetical spectrum with a sharp and broad absorption peak.

Consider the relative error that would be observed for a sample as a function of the transmittance or absorbance. Is there a preferable region in which to measure the absorbance? What do you think about measuring absorbance values above 1?

At very low sample concentrations, we observe that Po and P are quite similar in magnitude. If we lower the concentration a bit more, P becomes even more similar to Po. The important realization is that, at low concentrations, we are measuring a small difference between two large numbers. For example, suppose we wanted to measure the weight of a captain of an oil tanker. One way to do this is to measure the combined weight of the tanker and the captain, then have the captain leave the ship and measure the weight again. The difference between these two large numbers would be the weight of the captain. If we had a scale that was accurate to many, many significant figures, then we could possibly perform the measurement in this way. But you likely realize that this is an impractical way to accurately measure the weight of the captain and most scales do not have sufficient precision for an accurate measurement. Similarly, trying to measure a small difference between two large signals of radiation is prone to error since the difference in the signals might be on the order of the inherent noise in the measurement. Therefore, the degree of error is expected to be high at low concentrations.

The discussion above suggests that it is best to measure the absorbance somewhere in the range of 0.1 to 0.8. Solutions of higher and lower concentrations have higher relative error in the measurement. Low absorbance values (high transmittance) correspond to dilute solutions. Often, other than taking steps to concentrate the sample, we are forced to measure samples that have low concentrations and must accept the increased error in the measurement. It is generally undesirable to record absorbance measurements above 1 for samples. Instead, it is better to dilute such samples and record a value that will be more precise with less relative error.

Another concern that always exists when using spectroscopic measurements for compound quantification or identification is the potential presence of matrix effects. The matrix is everything else that is in the sample except for the species being analyzed. A concern can occur when the matrix of the unknown sample has components in it that are not in the blank solution and standards. Components of the matrix can have several undesirable effects.

What are some examples of matrix effects and what undesirable effect could each have that would compromise the absorbance measurement for a sample with an unknown concentration?

One concern is that a component of the matrix may absorb radiation at the same wavelength as the analyte, giving a false positive signal. Particulate matter in a sample will scatter the radiation, thereby reducing the intensity of the radiation at the detector. Scattered radiation will be confused with absorbed radiation and result in a higher concentration than actually occurs in the sample.