The diagram at the bottom of p. 290 shows the stereochemical detail of the mechanism of the reactions. It is important to understand the meaning of the endo and exo terminology. This terminology is used in reference to bicyclic systems such as the norbornane molecule shown below. The rigidity of these systems makes hydrogens (a) and (b) stereochemically nonequivalent. The exo hydrogen points outward from the ring, and the endo hydrogen points downward, opposite to the bridge, as shown.

If we apply this terminology to the alcohols borneol and isoborneol, we can see that they are not interconvertible, and therefore they are isomers. What kind of isomers are they? The fact that the carbon bearing the hydroxl group is chiral, and that there are other chiral centers in each of these molecules, makes these alcohols diastereomers. An instance showing some of these chiral centers (but not all, for clarity) is seen below. 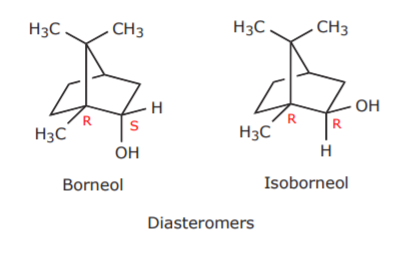