Most of the items of routine use in the organic lab can easily be identified as either disposable or not disposable. However there are certain items which for some reason seem to fall into a limbo zone. Examples of these are rubber bulbs. These items (shown below) are not disposable. 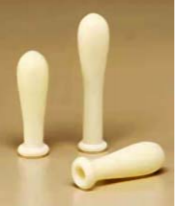 ALTHOUGH CHEAP LOOKING, THESE ITEMS ARE NOT DISPOSABLE

Test tubes, on the other hand, are disposable. However, before placing those into the broken glass container make sure to remove any chemicals from the tube. IT WOULD BE A GRAVE OFFENSE TO PLACE TEST TUBES WITH CHEMICALS IN THE BROKEN GLASS BOX.

BELIEVE IT OR NOT, TEST TUBES ACTUALLY LOOK LIKE THIS AND THEY ARE DISPOSABLE

Centrifuge tubes, on the other hand, are not disposable. But of course, you already knew this because it would cost you money to throw them away. Hmm, maybe that would be a good way to deal with rubber bulbs as well…

To recap, here is a list of a few behaviors which, if observed in the lab, may actually carry a curse with them:

a) Putting chemical waste into the wrong containers

b) Throwing away rubber bulbs

c) Placing anything in the broken glass box other than glass

d) Placing glass or chemicals in the regular trash cans

e) Leaving trash anywhere in the lab where it does not belong, including bench tops, the weighing balance area, or the hoods where you work.

THANK YOU VERY MUCH FOR YOUR CONTRIBUTION TO MAKING THE ORGANIC LAB THE MOST PLEASURABLE PLACE TO BE ON THE UTD CAMPUS !